October 12: A diversity of connections

Columbus Day is a national holiday in many countries of the Americas and elsewhere which officially celebrates the anniversary of Christopher Columbus's arrival in the Americas on October 12, 1492.


The landing is celebrated as "Columbus Day" in the United States, as "Día de la Raza" ("Day of the Race") in many countries in Latin America, as "Día de la Hispanidad" and "Fiesta Nacional" in Spain, where it is also the religious festivity of la Virgen del Pilar, as Día de las Américas (Day of the Americas) in Belize and Uruguay, as Día del Respeto a la Diversidad Cultural (Day of Respect for Cultural Diversity) in Argentina, and as Giornata Nazionale di Cristoforo Colombo or Festa Nazionale di Cristoforo Colombo in Italy as well as in Little Italys around the world.[1][2]

Indigenous Peoples' Day[1] is a holiday that celebrates the Indigenous peoples of America. It is celebrated across the United States, and is an official city and state holiday in various localities around the country. It began as a counter-celebration to the U.S. federal holiday of Columbus Day, which honors European explorer Christopher Columbus. Indigenous Peoples Day is intended to celebrate Native Americans and commemorate their shared history and culture.
The holiday was first instituted in Berkeley, California in 1992, coinciding with the 500th anniversary of the arrival of Christopher Columbus in the Americas in 1492. It later spread to Santa Cruz, California in 1994, and then to various other cities and states beginning in the mid-to-late 2010s. Indigenous Peoples' Day is held on the second Monday of October, coinciding with the designated date for the federal observance of Columbus Day.[2] It is similar to Native American Day, observed in September in California and Tennessee, and the same day as Indigenous Peoples' Day in South Dakota.
Bartolomé de las Casas (Spanish: [bartoloˈme ðe las ˈkasas] (

listen); c. 1484[1] – 18 July 1566) was a 16th-century Spanish historian, social reformer and Dominican friar. He became the first resident Bishop of Chiapas, and the first officially appointed "Protector of the Indians". His extensive writings, the most famous being A Short Account of the Destruction of the Indies and Historia de Las Indias, chronicle the first decades of colonization of the West Indies and focus particularly on the atrocities committed by the colonizers against the indigenous peoples.[2]
Arriving as one of the first European settlers in the Americas, he initially participated in, but eventually felt compelled to oppose the atrocities committed against the Native Americans by the Spanish colonists. In 1515, he reformed his views, gave up his Indian slaves and encomienda, and advocated, before King Charles V, Holy Roman Emperor, on behalf of rights for the natives. In his early writings, he advocated the use of African slaves instead of Natives in the West-Indian colonies; consequently, criticisms have been leveled at him as being partly responsible for the beginning of the Transatlantic slave trade. Later in life, he retracted those early views as he came to see all forms of slavery as equally wrong. In 1522, he attempted to launch a new kind of peaceful colonialism on the coast of Venezuela, but this venture failed, causing Las Casas to enter the Dominican Order and become a friar, leaving the public scene for a decade. He then traveled to Central America undertaking peaceful evangelization among the Maya of Guatemala and participated in debates among the Mexican churchmen about how best to bring the natives to the Christian faith.
Traveling back to Spain to recruit more missionaries, he continued lobbying for the abolition of the encomienda, gaining an important victory by the passing of the New Laws in 1542. He was appointed Bishop of Chiapas, but served only for a short time before he was forced to return to Spain because of resistance to the New Laws by the encomenderos, and conflicts with Spanish settlers because of his pro-Indian policies and activist religious stances. The remainder of his life was spent at the Spanish court where he held great influence over Indies-related issues. In 1550, he participated in the Valladolid debate in which Juan Ginés de Sepúlveda argued that the Indians were less than human and required Spanish masters in order to become civilized. Las Casas maintained that they were fully human and that forcefully subjugating them was unjustifiable.
Bartolomé de las Casas spent 50 years of his life actively fighting slavery and the violent colonial abuse of indigenous peoples, especially by trying to convince the Spanish court to adopt a more humane policy of colonization. And although he failed to save the indigenous peoples of the Western Indies, his efforts resulted in several improvements in the legal status of the natives, and in an increased colonial focus on the ethics of colonialism. Las Casas is often seen as one of the first advocates for universal conception
of human dignity (later human rights).[3]
From Los Angeles Times
The cruelty of Europeans in those dark times, including Christopher Columbus, was no greater than among peoples everywhere.  In the Americas, the Aztecs slaughtered and oppressed rival tribes, which is is why some groups of people welcomed the Spanish when they arrived. The great institutions of democratic government, freedom of speech, religious tolerance and the rule of law were largely not found in indigenous America. They were brought to this continent (or developed here later) by Europeans. 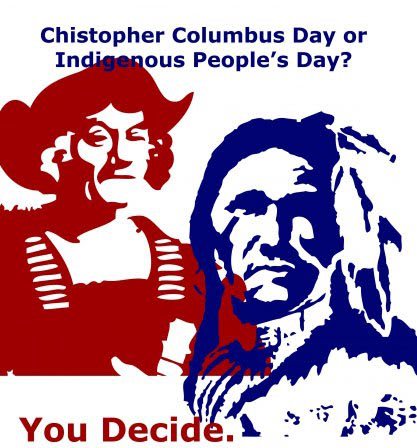 From the Desk of Joan Korenblit,
Executive Director, Respect Diversity Foundation, www.respectdiversity.org
The indigenous resistance that has never ceased these five centuries and some continues in spite of a brutal repression and now all of us of the cosmic race, of pure necessity, must align ourselves with their struggle, for that struggle is ours if we are to survive on the Earth, holy mother of our race, the human race - and of all our relations, the other animals, the plants, the minerals. On the round, seamless Earth all borders are fictitious and what threatens one threatens all. To think otherwise is not only immoral but insane.
Posted by Cherylynn O'Melia at 4:46 AM