Images courtesy International Rescue Committee and Wyoming Public Media and UN
Join Students Rebuild, the International Rescue Committee and Global Nomads Group to help Syrian youth from conflict areas recover from crisis and grow into happy, healthy adults.
To participate, make and mail in pinwheels. For each pinwheel you send in, the Bezos Family Foundation will donate $2—up to $400,000—to IRC’s Healing Classrooms program. The more pinwheels you send, the more children you’ll help!
Pinwheel lesson Plan at http://www.pinwheelsforpeace.com/pinwheelsforpeace/pinwheel_lesson_plan.pdf

A pinwheel template.  There are many others if you do a quick  google search! 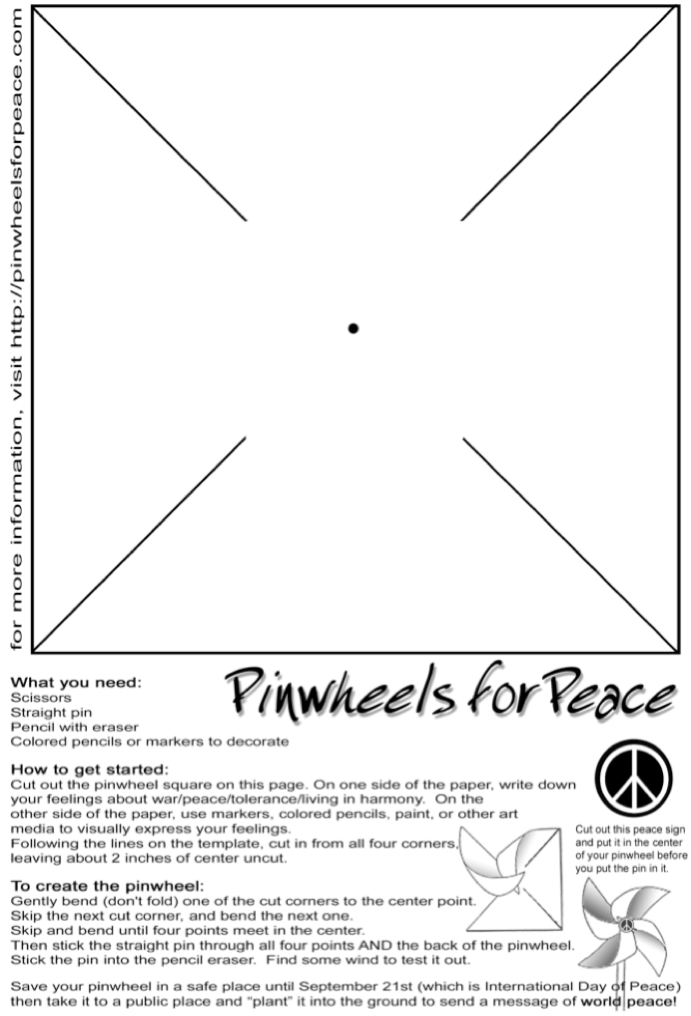 Imagine you have to run away from your home suddenly because of fighting and bombs being dropped in your neighborhood. You flee so quickly, you have to leave most of your personal belongings behind. Will you ever see your family and friends again? Your home? Your school? And what if your new home is in an unfamiliar country, where people speak a different language?
Since the civil war began, nearly 11 million Syrians have fled their homes. Of those, more than four million Syrians have sought refuge in neighboring countries of Lebanon, Northern Iraq, Jordan and Turkey. Nearly six million children have been affected by their country’s civil war and on average, it takes 17 years for most refugees to return home. This means millions of Syrian children will likely spend most—or all—of their childhood as refugees.
Even though the Syrian struggle seems overwhelming, we can take action and see change for children! Register for the Healing Classrooms Challenge, then Get Started with making pinwheels.
The International Rescue Committee will distribute a selection of your pinwheels to Healing Classrooms students in Lebanon and Iraq. Funding generated by the Challenge will train teachers in special techniques to engage conflict-affected children with social-emotional learning opportunities and to create secure, nurturing learning environments. Learn more about Healing Classrooms.
Questions? Visit our Healing Classrooms Challenge FAQ page.
The Students Rebuild Healing Classrooms Challenge, in partnership with the International Rescue Committee and Global Nomads Group will help Syrian youth from conflict areas recover from crisis and grow into happy, healthy adults. The Bezos Family Foundation will match every pinwheel you make and mail in with $2--up to $400,000--to support IRC's Healing Classrooms program. The more pinwheels you send in, the more children you'll help!
TOPICS:Healing Classrooms, Healing Classrooms Challenge, Humanitarian Crises,Humanitarian Relief, Iraq, Jordan, Lebanon, Syria, Syria
Children affected by crisis—whether war or natural disaster—need help restoring a sense of normalcy and safety in their lives. One of the best ways to do this is to reintroduce the familiar routine of school, where teachers can provide structure and stability, and can work with children to heal. The International Rescue Committee partners with schools in crisis zones to create Healing Classrooms—paired with support from parents and the community—so children can recover, grow, develop and learn.
Healing Classrooms trains teachers in special techniques to engage conflict-affected children with social-emotional learning opportunities and to create secure, nurturing learning environments. Funds generated by the Challenge will support the IRC’s Healing Classrooms programs which:

Back to School Coopetition

Casady YAC (Youth Active in the Community) is signed up to receive an assignment via e-mail on a daily bases from October 14-October 24.  Our big project is the Students Against Hunger - Casady Cans Do Food Drive benefiting the Regional Food Bank of Oklahoma.  We invite anyone interested in participating to register to play as an individual or a group at http://compassiongames.org/back-to-school/