If God gives you a vision I promise he'll put it in your hands..Christmas is coming to F.D. Moon Academy!!

Embrace Grace would like to Thank EVERYONE who has contributed in any way to making this possible! Special thanks to our Athletes First family, Our Casady Family,and everyone who supported or participated in our Holiday Blowout event!! We Love you all!  Johnesha H.

By Professor Carol on Dec 15, 2014 03:00 am
My mother called it a crèche. I wondered what kind of a word crèche was, but didn’t ask.
Ours had a rickety wooden stable and an even more rickety pressboard manger. The figures of Jesus, Mary, Joseph, two sheep, a camel, two shepherds, and a token wise man were made of soft ceramic. Best of all was a kindly angel who could be hooked and unhooked from the top of the stable. Crouched beneath our Christmas tree, I played with them endlessly. I still have the drastically chipped remnants of those figures. 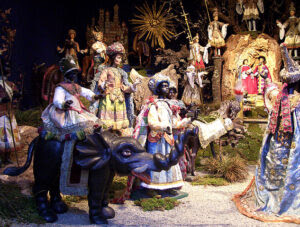 Germany: Baroque Nativity Scene – Andreas Praefcke (CC BY 3.0)
Embracing Grace Project recives Service-Learning YAC Grant
Nativity Scenes are such precious items. Whether yours is an elaborate heirloom, or something made by a child in first grade, they are irreplaceable treasures. And they have a noble history. Let’s take a closer look.
First the name: the French term crèche, comes fromcripia, a low Latin word for cradle. The Germans call it aKrippe, but the Italians use a different root: presepe,from the verb praesepire, which means to “enclose or fence in,” referring to the place where animals were kept.
Nativity Scenes can be tracked to the 7th century, while frescoes of the manger scene date back centuries earlier. But it was a live reenactment of Christ’s birth staged by St. Francis of Assisi in 1223 that really put the Nativity Scene on the map. In the Italian town of Greccio, St. Francis used local shepherds, real animals, and a manger to teach the townspeople the sacred story. So if your church or community happens to stage a “live Nativity Scene,” be proud of the fact that you’re continuing a nearly 800-year-old tradition.
Eventually Nativity Scenes became a kind of status symbol for the wealthy. And not surprisingly, the materials varied from wood, cloth, and straw to porcelain, bronze, and silver. You may want to consult the Friends of the Creche.
There are many colorful traditions surrounding the Nativity Scene. The Italians set up presepi on December 8, the Feast day of the Immaculate Conception, although some churches and families wait until Christmas Eve. In an old German tradition, figures are added in each week until Epiphany (January 6), when the Three Kings appear. The Spanish have colorful traditions and one town, Alicante, has a Nativity Scene Movement and boasts a Nativity Scene Museum.
Nativity Scenes are an important form of folk art . . . and not just European folk art. People from every corner of the globe make Nativity Scenes using local material, be it bark, nuts, cloth, or clay. One of my favorites comes from Arizona and depicts Joseph and Mary as Native Americans, surrounded by feathered warriors.
My own revelation of the importance of Nativity Scenes came well into adulthood when I wandered into theDresdener Museum für Sächsische Volkskunst (The Dresden Museum for Saxon Folk Art). I blinked in astonishment to find an entire floor filled with Nativity Scenes. Intricate and complex, some were bejeweled. One had scores of figures winding down a two-foot tall “mountainside.” Several replicated the flora of the Middle East in fine detail.
Advent is a fine time to explore Nativity Scenes around the world. As we do, we will treasure the crèchebeneath our own Christmas tree all the more
Posted by Anonymous at 1:14 PM