F-5 Festival: http://f5fest.com/2011/ A new festival exploring the intersection of art, design and entertainment. Organized by passionate people who truly understand the value of community and creativity, F5 Festival seeks to be a meeting place for the brightest minds in the world.  Founded on the belief that true insight and lasting inspiration come from unexpected places. F5 fosters creative collisions,: those moments of lasting insight and inspiration that occur when we discover something unexpected. The two-day festival gathers creative directors, motion designers, filmmakers, digital artists, photographers, producers, interactive designers, graphic artists, agency executives, visual effects experts, musicians and industry visionaries—to name only a few. F5 is more than just the pulse of creativity; it is its heart.

What is F-5 Fest at Casady School
It is at developing stage, but Mrs. Clay, Casady's Director of Service-Learning stated, "Looking for ideas to celebrate  National Volunteer Week in April, sophomore YAC chair, Jessica G. brought the idea of creating F-5 Fest.  F-5 Fest will be a school wide set of direct, relationship building fundraising activities benefiting a local charity chosen by the YAC board.  In 2013, proceeds will go to a designated non-profit chosen by the family of a Casady baby battling Pearson(‘s) Syndrome.  The exciting thing about this idea is that as important as fundraising, we will grow positive relationships and enhance the culture of kindness across the lake .  In the process of activities, we will make memorable memories we will relate to the next generations as we talk about our Casady experience focusing on the needs of others."

First F-5 Fest Week Meeting:  Jessica G., YAC sophomore chair ,presented her idea at the February YAC meeting.  She wanted to promote service in the culture of our school and more intentional service collaborations across the lake with a project similar to BALTO or SWINE week.  During those weeks, at public schools, students have a series of fundraising activities for a chosen cause.

Jessica showed the BALTO Week video and opened the floor for ideas. Connections to STUCO, Gales, Art Club (t-shirt) contest were brought up.  What about if every club embraced a day?  Jessica stated that this year, we might not have a full week, but whatever we do, should be done WELL to insure sustainability of the events in the culture of the school.  Mrs. Clay stated to be watchful with the quality of the events,  being discouraging of anything that will waste food for entertainment. We have 700,000 Oklahomans under the poverty level, many experiencing hunger.  She also stated concern with using people for a quick laugh to earn dollars.  She hopes the organizers will make sure to focus on respecting human dignity and the fact that there are so many younger students looking at UD students as their role models. 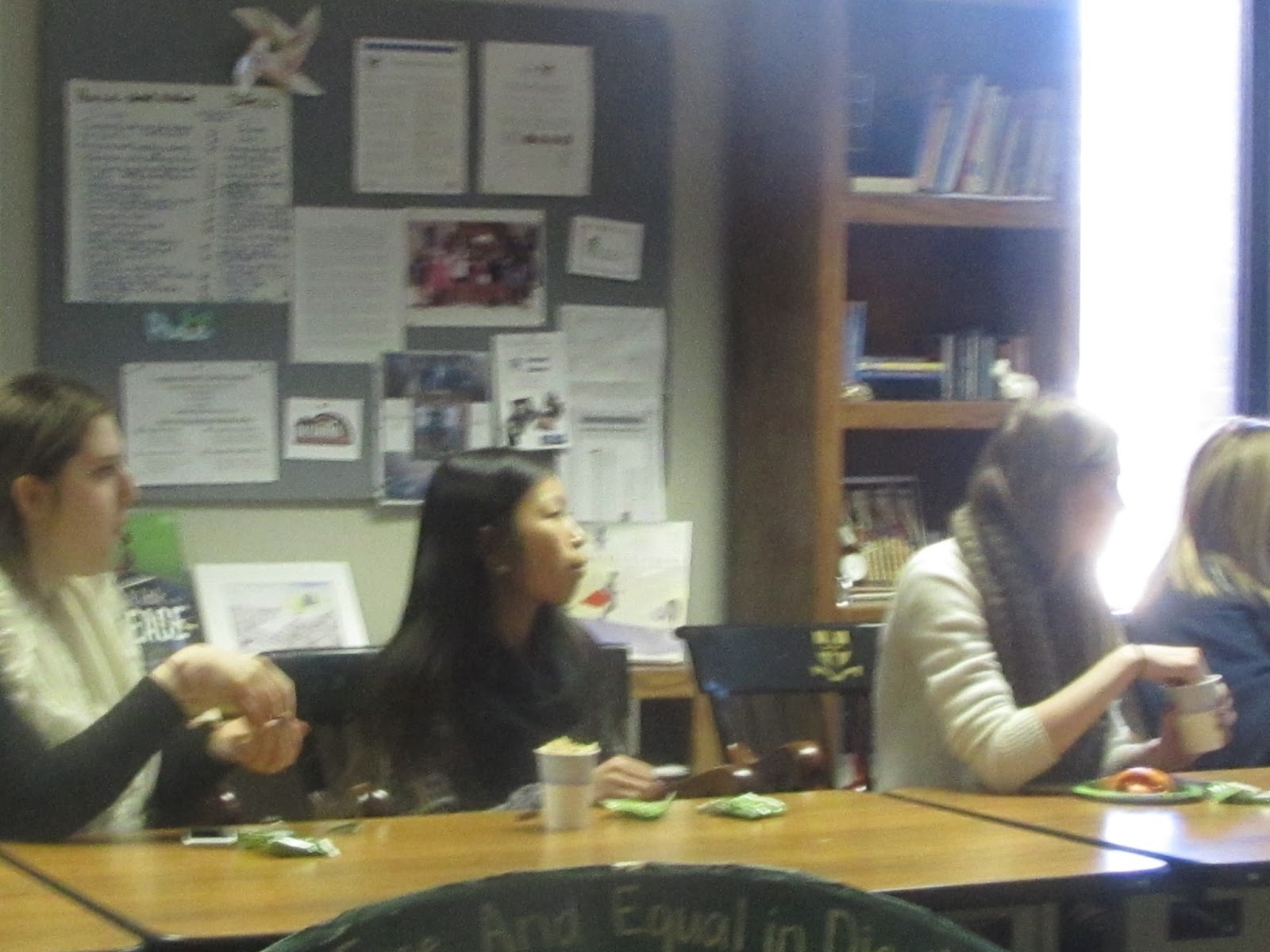 It was very exciting to hear the enthusiasm for the idea.  The Crossroads Hospice guests attending the meeting stated, "The kids made us realized how little we did while we were in high school...  They made us wish we could go back and take  advantage of what was being offered, be more involved." 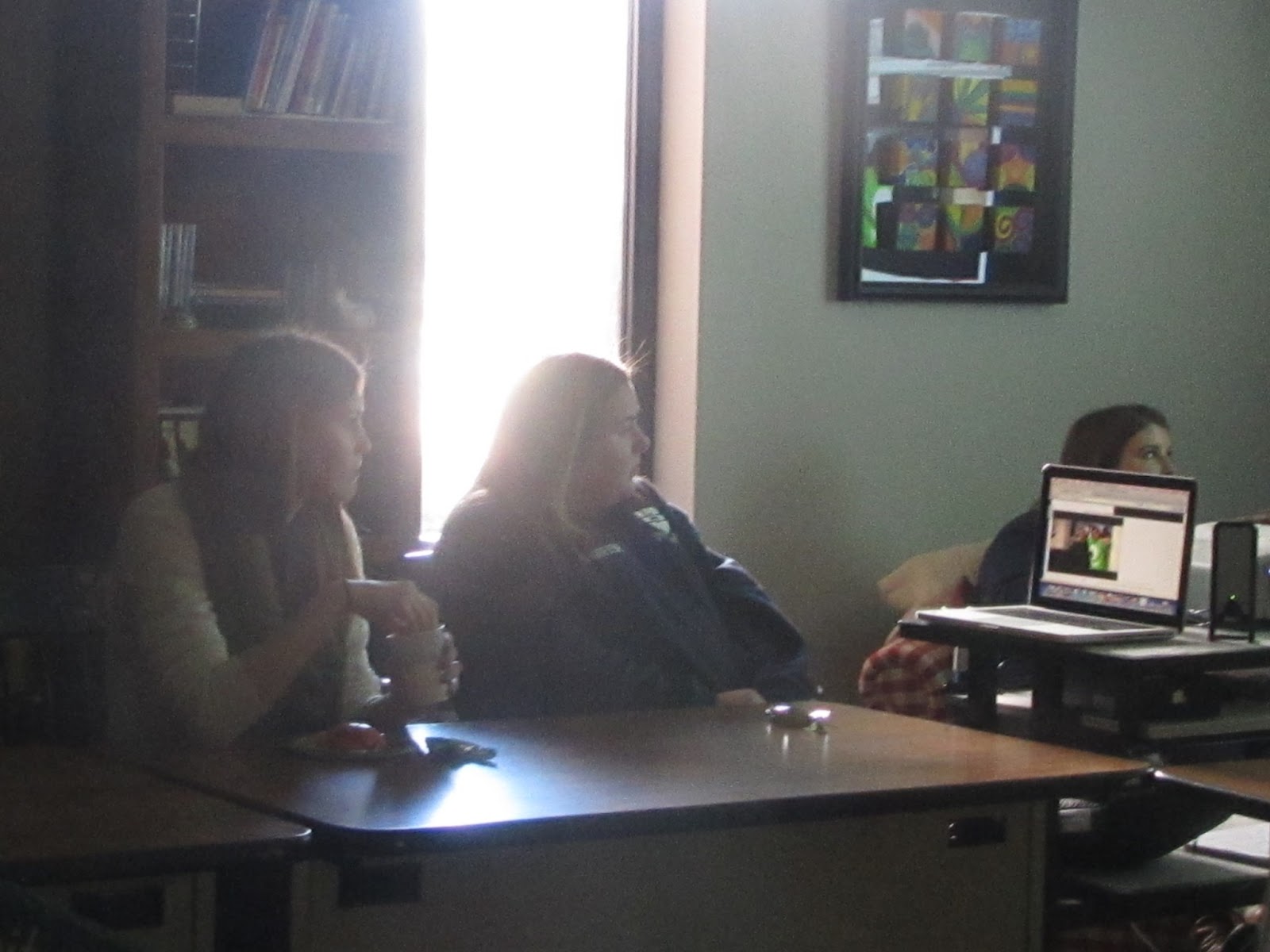 Jessica gave credit of the creative F-5 name to Jessika R.  Mrs. Clay stated that her first reaction to  F-5  was negative because of its connection to destruction, but after the above quick internet research, she sees it as a massive inter-divisional positive effort to help a cause and develop relationships and leadership in kindness.  It is short, sweet, to the point and with many creative possibilities.
As Jessica started her research for an organization to receive the funding from events with emphasis on relationship building; she first considered OATH http://www.oathcoalition.com/about-us/about-faq/,  After Mrs. Clay shared the below e-mail from Mrs. Carol Williams, Primary Division teacher, and remembering Bennett's mom moving chapel speech during STUCO's blood drive, Jessica decided to propose embracing helping Bennett H. and his family with F-5 Fest 2013 fundraising.
Written Dec 28, 2012 10:07am: Carmen.  Below is some information about Bennett.  I hope this is what you need. Bennett H. is 11 months old.  He is the son of Aimee and Ben H.  Mrs. H. is the reading / learning specialist in the lower division here at Casady.   Adeline, Bennett's sister, is a pre-kindergarten student at Casady.  I have copied some information I received from Aimee after they received a diagnosis on Bennett.
Our hearts are breaking after learning the diagnosis for Bennett last week so this post has been most difficult to compose. The news is not good as the test results from Baylor indicate he is fighting an EXTREMELY RARE disease called Pearson(‘s) Syndrome. There appear to be less than 100 diagnosed cases worldwide! We are trying to wrap our minds around it and it’s extremely overwhelming.
This is OUR explanation compiling some of the information his team of doctors provided for us. Pearson Syndrome is a rare multisystem disorder caused by mitochondrial deletions/mutations in cells throughout the body. (Mitochondria are small units responsible for energy production in the cells.) Mitochondrial disease causes cells to not be able to carry out their function and result in various symptoms. At present, for Bennett, it has been bone marrow failure and pancreatic malfunction.
Most cases of Pearson Syndrome appear to be random occurrences instead of an inherited condition and Bennett’s is just that. Unfortunately there is no specific treatment for Pearson Syndrome other than to support the symptoms, which is what we have been doing and will continue to do. He will be dependent on red blood transfusions (which have been about every two weeks) to treat his anemia, We continue his daily dose of neupogen to stimulate white cell production. He’ll probably need more platelets at some point. He’ll continue taking his vitamins (A,D, E and K liquid). We’ve added enzymes to his daily routine in hopes that it will help him absorb more nutrients when he eats.
In Pearson Syndrome, disease problems tend to show up first in blood and the pancreas (like it has for Bennett), but the bad cells can already be in other organs and tissues in the body waiting for other difficulties to occur. His test results indicate only 20% of the cells in his body are normal leaving 80% that are compromised. So, it’s a “wait and see” situation to know what might happen next.
As you might imagine there are and will continue to be enormous expenses involved in Bennett's ongoing care.

The H's are a wonderful family that will truly be grateful for your help and support.  Let me know if I can be of further assistance.  Carol Williams

For details and to share ideas about  Casady F-5 Fest 2013, contact F-5 Fest Chair @  jag427@cox.net.   UPDATE ON F-5 FEST 2013:  During lunch, Jessica talked to Mrs. Seitter who said the Art Club would love to help. Jessica also talked to Sidney G. Sidney said she would love to draw something kinda like an emblem. Jessica will  give her the color scheme and other emblems from other schools.
Jessica reported that the first possible event could be: babysitting fundraising on campus during the March 1, CPO Auction.   Jessica worked hard during the snow day making permissions, flyers and registration forms, to be ready should the go ahead be granted.  The event was approved with reservations and by the time of the meeting, Jessica still needed to have disclaimers on registration form approved by Mr. Sheldon and division directors.  Mrs. Clay was awaiting response from LD and PD teachers to help.  The activity was approved with a minimum of 3 adults and a recommendation of having a nurse on site if possible.
The F-5 Fest received approval to fundraise with restrictions given by our business manager -still pending approval of Registration Disclaimers and needed LD and PD faculty helpers-, "We run into a roadblock in making a fundraiser directly for the Hs--essentially, regardless of the tragic circumstances, if we're giving the money to a private individual, we're running a business and compensating somebody, and that has a number of implications regarding taxes, school policy, etc. "
Bennett's family is going to designate the organization for F-5 Fest proceeds, but Mrs. France, MD Director told Mrs. Clay on 2/22/2013 that the Bob Stoops Champions Foundation  http://www.oufoundation.org/sm/winter09/story.asp?ID=313
will be matching what F-5 Fest events collect.  Mrs. France e-mailed
"A benefit account to help defray Bennett's medical/care costs has been established at BancFirst locations.  Anyone wishing to make a donation can do so at any branch.  The account is listed under his name...Bennett H. Benefit Account."  UPDATE:  Mrs. France sent the following additional e-mail, "Donations can be made to the Bob Stoops Champions Foundation in honor of Bennett H. if they wish.  Checks would be written directly to the Foundation with a note in the memo.  The Champions Foundation will match the donations to a charity of their choosing.Donations can be mailed to: Bob Stoops Champions Foundation, Barry Switzer Center, 180 W. Brooks, Norman, OK  73069." 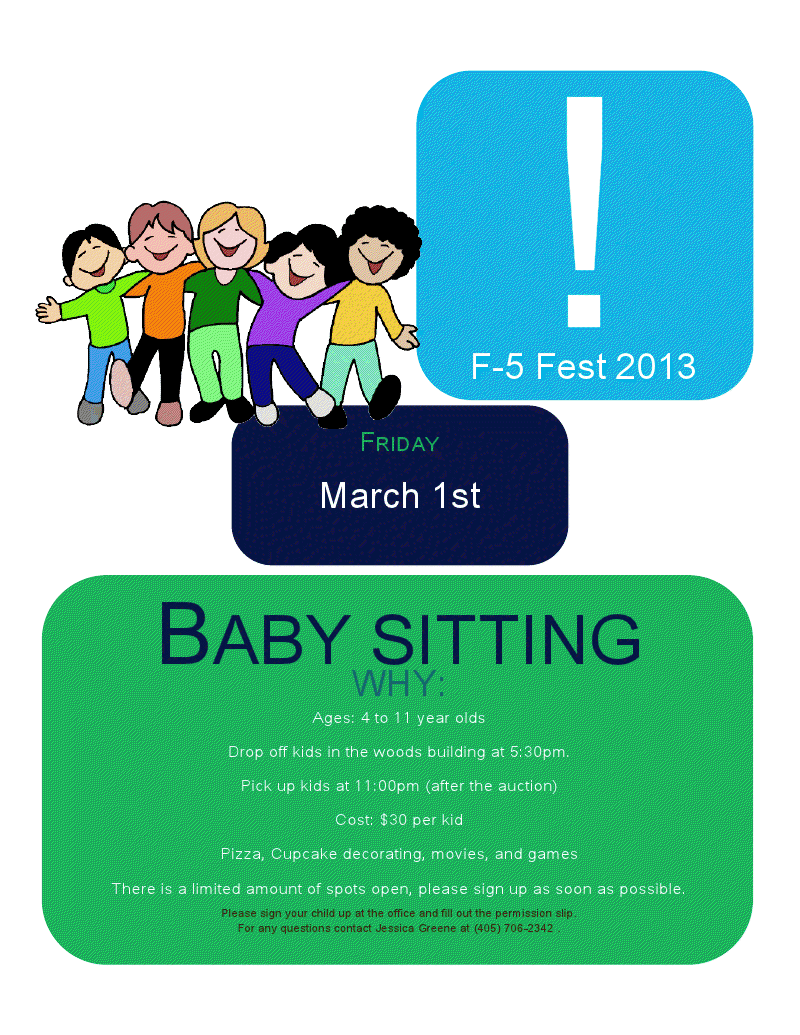 UPDATE: The babysitting event cannot take place on campus due to concerns with safety of children, teens, liability issues and no available faculty to support the effort because they were attending the auction.   Mrs. France recommended teen volunteers to consider babysitting at auction attendees residences and contributing proceeds to F-5 Fest.  A F-5 Fest update is the first item of the YAC March meeting http://casadyyac.blogspot.com/.
Posted by Cherylynn O'Melia at 4:02 AM