Casady Cans Do: Reflection and Results

Primary Division:  Things to have in mind for 2013: Carpool starts at 7:50 AM. We need volunteers with first hour off with permission to use their study hall to help students in the PD Division.  Stickers needed for everyday of the food drive at this division next year.  When high school students are visible role models, donations increase!  The Red Wagons of Hope Walk is on Thursday and students with study hall at the times below are needed to help the children take their donations, weather provided. Due to bad weather, this activity did not take place in 2012, instead of the Red Wagons of Hope march, the children placed their donations in a van that took the cans to the Food Bank truck
*10:15---Pre-k bring cans to Food Bank truck. *2:00--K takes cans to the truck
Monday: 30 cans,
Tuesday: 63 cans,
Wednesday: 69 cans
Thursday: 35 cans
﻿
Friday: 21 cans  5 Day Total: 218 cans
﻿ 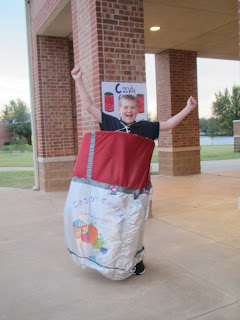 Middle Division: Winner of all divisions competitions in number of cans donated, Wednesday, Thursday and Friday! Overall winner of the Casady Cans Do, Students Against Hunger Competition.  The dancing MD can motivated others to dance to eliminate hunger and inspire students and parents to give.

New this year was music with the can dancer which prompted groups of dancing students in front of the MD on Thursday and Friday.  MD is considering making house costumes and creating a hunger fighting songs and dances.

Friday:
Martin House 1,050 cans
Overall winner of the MD competition for an out of uniform!
MD Total for Food Drive 3,473 cans

Upper Division:  YAC chairs provided daily raffles and Judy H. revived the old Casady tradition of Canstruction Competitions.  The donations progressively increased, but we need to consider competitions between sports, clubs, and maybe an empty bowls banquet with silent auction and fashion show next year.  Fall Fest weather did not permit YAC to raise but $55 for the Food Bank.  If we have the drive at the same time as homecoming again, we should consider developing a collaboration with the alumni office and other clubs.  Multicultural Club surprised YAC with a $500 donation for the Food Drive after Fall Fest! 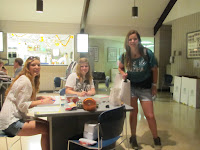 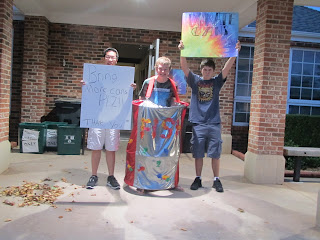 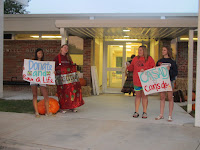 $1,016.87 WITH MULTICULTURAL CLUB DONATION & FALL FEST FUNDRAISING.
Posted by Cherylynn O'Melia at 2:10 AM